Use the following rules for labels and description texts in IntelliJ user interfaces. For punctuation in numbers and times, see Data formats.

End an action name with an ellipsis if it opens a dialog where input is required or possible. An ellipsis helps users understand if an action is immediate or additional interaction is to follow.

This rule applies to actions in the following controls: button, link, menu item.

Use an ellipsis at the end of a truncated text if there is no scrollbar and this is not a table column, see truncation in table columns. Provide a way to show the full text, for example, expand the control or show a tooltip on hover. 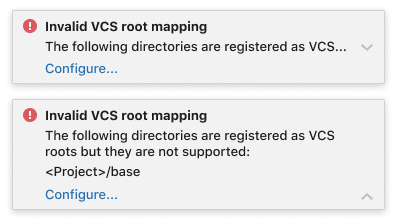 A notification can be expanded to show the full text.

Use an ellipsis with verbs describing an ongoing process, for example, Searching… See more examples in Progress text.

Use the ellipsis character … (U+2026 in Unicode). Do not use three separate “dot” characters.

Do not put a period at the end of a single sentence, even if it is a complete sentence.

If a text consists of several sentences, put a period after each sentence.

Do not put a period at the end of an IDE action.

The empty text consists of two sentences but the second one is an IDE action so it should not have a period.

Note that links that are not IDE actions can have a period in the end.

Before a conjunction in a list of three or more items (the Oxford or serial comma).

Border for a text field, combo box, or spinner

Between symbols in series.

Use a colon after labels for inputs and radio button / checkbox groups.

Do not use a colon if a label and text inside the input element make a phrase.

Generally, do not use contractions.

Use contractions only if the action name has 4 and more words, and the contracted word does not affect the meaning significantly.

Don’t send → Do not send
Do not save, forget passwords after restart

Use single quotation marks by default.

Indexing library 'KotlinJavaRuntime'
Error parsing '.mvn/maven.config'
Add 'root=true' to the beginning of the file
Show 'Scratches and Consoles' in the Project view

Do not use quotation marks for keyboard key names.

Do not use double quotation marks.

Use only in alerts when asking for confirmation.

A file with this name already exists. Do you want to overwrite it?

Avoid in other cases.

Do not use. Exclamation points can cause the sentence tone to be interpreted as aggressive, condescending, or overly informal.